July 19, 2016
I was standing in a private room looking at a huge bronze singing bowl. I was in Lucerne, the third stop on a trip to four regions in Switzerland, staying at the Palace Luzern.  The hotel describes it as the world’s first giant singing bowl and I had signed up for the “ceremony,” an experience that promised a “state of lightness and deep relaxation.”

The giant bowl is struck, causing 1,000 frequencies to flow through the body and “Every cell unites in harmonious vibration,” states information at the hotel website.

The giant singing bowl took 15 years to create.  This process included studying the effects and functions of small traditional Tibetan singing bowls, making the mould for the bowl, which was cast in solid bronze and has a diameter of 1.76 meters and a weight of 1.2 tons.  It had to be housed in this cozy room on the ground floor instead of in the third floor spa (for obvious reasons.)

It has been found that certain vibrational sounds can invoke a deep state of relaxation. These vibrations can also help with meditation, which is why singing bowls or small gongs are sometimes used in certain treatments (especially those for balancing chi (energy) and in yoga.  Singing bowls in particular are used for stress reduction, healing and chakra balancing.

As the ceremony began, I was offered water to drink in which a jaspis stone from New Zealand had been soaked. Jaspis (or jasper) stones are considered to be healing stones.  It is an ancient stone worn by shamans and priests as it is also considered sacred and offers protection. The power and purpose of the stone can depend on the type and color.  Jaspis stones have been used for focusing and centering the mind in meditation, as well as to alleviate stress, inspire tranquility, peace and calm. The water helps the vibrations go inside the cells, the therapist explained, and is only used at the spa in conjunction with the singing bowl.

The ceremony is performed while standing inside the bowl or suspended above it in a hammock.  I chose to lie in the hammock. Another journalist was there to experience the ceremony and chose to stand inside the bowl.  I was curious to see if we would have different results.

A ball is pushed up to strike the bowl, using the same type of device that is used to spin a rollercoaster. During the ceremony, which last 10 minutes, I could feel most of the vibratory effects in my head, feet and hands.

While the other journalist did indeed experience a state of relaxation, I was charged with energy, feeling chi in my hands, the way they often feel when doing Tai Chi.  As I was served more of the water, I asked the therapist about our polar opposite reactions and she explained that the experience gives you what you need. I’m normally calm and quiet, in a relaxed state and often seek out treatments or activities that give me more energy. So that made sense.  I was refreshed and ready to take on the day. (I also became a chatterbox—highly unusual.)  I continued to feel pleasant and serene during the day.

The 25-minute Classical Ceremony is CHF 85 (Swiss Francs) which is about $86.30, and includes an explanation of the ceremony, a refreshing drink, 10-minute ceremony and relaxation with tea. I’m not sure how many people would go for spending $86 for water, tea and 10-minutes of sound vibration, but for skeptics, it does have a positive effect on the body.  Many locals come in and do the ceremony for relaxation.  For those who are into more traditional spa treatments there are spa packages that include the 25-minute Classical Ceremony along with free use of the spa (gym, sauna, steam, aroma shower and ice fountain) or that include breakfast or lunch, a 90-minute treatment after the ceremony. There are also packages for two, such as Two-Tone (that includes the 25-minute ceremony plus two hours at the spa.)  Find more information about the Giant Singing Bowl Ceremony at the Palace Spa website.

Popular posts from this blog 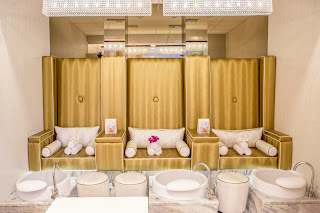 Photo: Pixabay.com My feet are killing me. Oh, my aching feet. How often have you moaned those words while rubbing the soles of your poor throbbing feet? If you’ve been running around doing last minute shopping, have aching feet from wearing those fierce party stilettos for hours or have simply been on your feet all day, I’ve got some ways to soothe and smooth tired (or abused) tootsies, as well as rough, dry and cracked skin. Fill two tubs (or foot baths) one with hot water and the other with cold water.  Make sure to fill both tubs with enough water to cover the feet to ankle level.  (Test the hot water to make sure that it is not so hot that it will scald your feet.*) Place your feet into the hot water for three minutes, then switch to the cold water for 30 – 40 seconds.  Repeat this two times, ending with the cold water. Alternating between the hot and cold water is invigorating and will relieve foot fatigue and stimulate circulation. When you’ve been on yo
Read more 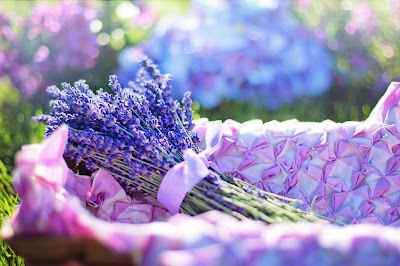 Lavender. Photo: Jill Wellington from Pexels Voyage is a jet lag remedy I could have really used during the years when I was crazy enough to travel from New York to Hawaii and then straight to Jamaica!  Voyage is an herbal jet lag remedy formulated by clinical herbalist Kilu Horecki , who is trained in western herbalism and Chinese traditional and Ayurvedic medicine.  The claim is that Voyage helps when you’re traveling across multiple time zones. In addition to helping your body cope with the usual symptoms of jet lag, it also helps with altitude and travel sickness, calms anxiety, boosts the immune system and protects against food poisoning.  Photo: Courtesy of Kilu Voyage contains a proprietary blend of “organic and wildcrafted botanical ingredients,” some of which include: Albizzia , a plant native to China. The flowers, stems and bark are used to make medicine. It is taken for anxiety, depression and insomnia, and to improve mood. Albizzia has calming
Read more